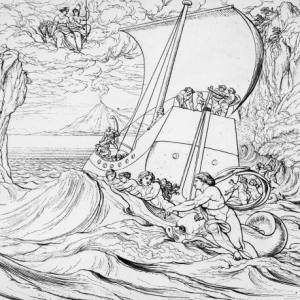 The Life of a Song: Song to the Siren
蒂姆·巴克利（Tim Buckley）

To the ancient Greeks, they were hybrid creatures, part bird, part woman, who lured sailors to their death with the spell of their music. In 1967, singer and songwriter Tim Buckley and poet and lyricist Larry Beckett paid tribute to those deathly seducers with “Song to the Siren”, a haunting ode to doomed love whose story is the stuff of pop legend.

The story began when Beckett wrote the lyric and took it to Buckley’s house. Buckley took a look, had his breakfast and within minutes “Song to the Siren” had emerged, almost fully formed. The following year Buckley, then a figure of some standing for his adventures in folk-jazz-rock, sang it on the last ever episode of The Monkees television show, introduced off-camera by Micky Dolenz’s dramatically curt “This is Tim Buckley”. In the YouTube footage, the segment’s psychedelic visual effects cannot distract from the song’s simple sweet-sadness, Buckley’s 12-string guitar ringing out, pure voice singing “Long afloat on shipless oceans . . . ”

But it would be another two years before Buckley released the song. Beckett’s lyric featured the line “I’m as puzzled as the oyster”, which attracted derision; Buckley was stung, and abandoned the song. Eventually Beckett rewrote it as “I’m as puzzled as the new-born child”. In the meantime, in 1969 country crooner Pat Boone released an almost laughably absurd, horn-drenched misreading of the tune that opens with him laughing “Yo-ho-ho and a bottle of rum”.

In 1970, Buckley set the record straight, releasing “Siren” on his experimental Starsailor album, which flopped. Buckley died in 1975 from a heroin overdose and remained a peripheral, cultish figure.

But “Song to the Siren” continued to exert its siren-like attraction to the music cognoscenti. Ivo Watts-Russell, co-founder of the quintessentially indie label 4AD, counted the song among his favourites. In 1983, he was assembling a group of musicians under the name This Mortal Coil to record a single. As a B-side, he wanted “Song to the Siren”. This Mortal Coil’s musicians included guitarist Robin Guthrie and singer Elizabeth Fraser of Cocteau Twins, and it was they who recorded “Song to the Siren”. Their reading set the template for those that were to follow — drifty, druggy, drenched in reverb, a perfect setting for lyrics such as “Did I dream you dreamed about me?”. Fraser, a Scot, embellished the melody with melismas that seemed part-Caledonian folk, part-Middle Eastern ululation. The B-side became an A-side, and went on to sell half a million copies.

After which, the sirens lay largely dormant until the turn of the century when major figures began to pick up the song. In 2002, Robert Plant covered it on his Dreamland album, garnished with his characteristic “oh-ohs”. In 2007, George Michael opened his gig at the new Wembley stadium by singing “Siren” from offstage (he later released it as a single).

The solo career of Red Hot Chili Peppers guitarist John Frusciante is decorated with sublime moments of lo-fi brilliance, and his 2009 version of “Siren” is one of them, catching the song’s druggy wave with droning keyboards and a vocal that sounds as if it was recorded in a neighbouring studio. Sinéad O’Connor’s 2010 version is heavily indebted to This Mortal Coil’s mystic-Celticism. Bryan Ferry’s version for his Olympia album (also 2010) is layered, dense and dark; after a while Ferry disappears from the song, leaving the insistent music to exert its pull.

There’s a curious and tragic coda to the story. In the mid-1990s, Fraser struck up a relationship with Buckley’s son, Jeff; they recorded together (though not “Siren”). In 1997, after they’d separated, Jeff Buckley was in Memphis, preparing to record songs for the follow-up to his debut album, Grace. One evening, he went swimming in a channel of the Mississippi, singing Led Zeppelin’s “Whole Lotta Love” as he swam. His body was found six days later.

For more in the series, and podcasts with clips of the songs, ft.com/life-of-a-song